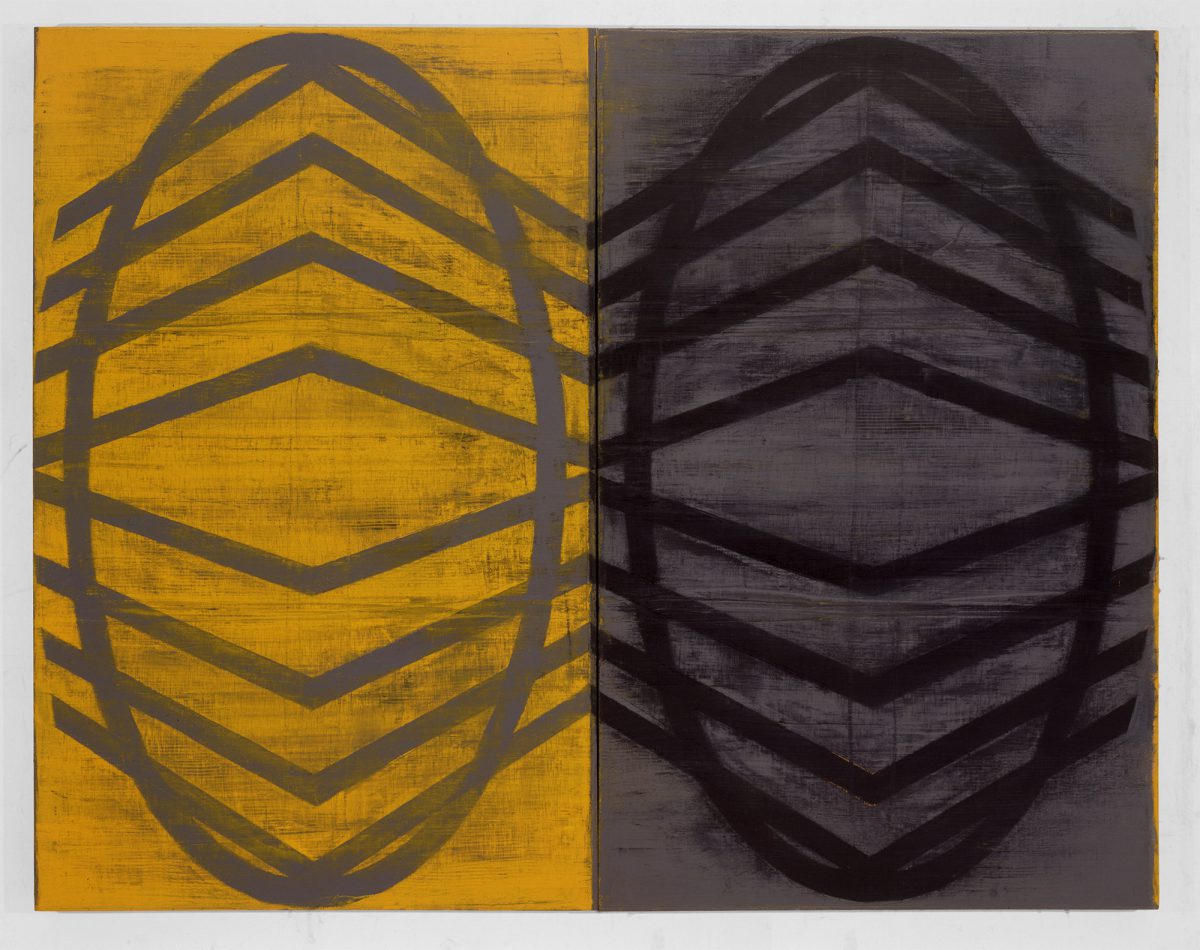 David Row’s paintings—mostly diptychs—are collisions of bold, mirrored geometric patterns. Ruggedly scaled bands of even width enter each panel, either from the sides or from the top and bottom, in the shape of concentric ellipses, diamonds, DNA-like helixes or staggered ladders. The patterning is often complicated by the overlapping of an angular progression with a curvilinear one, which creates intriguing rhythms and counterpoints within the structuring bands. The paintings are dominated by only two or three hues each, and the pattern/ground colors reverse where the diptych panels meet. This color reversal generates a further structural complication (these ‘may be the most complex simple paintings you’ll ever see, or else the most simple complex ones).

Row integrates his powerful compositions into the space of the painting—that is, the world existing in the mind’s eye of the artist—through the means of a carefully controlled nocturnal light that is as filmic as it is atmospheric. He achieves luminosity in his work by brushing the paint on and scraping it down over a dark ground that shows through from beneath. Each color appears to have something of the other in it, and the lighter hues glow with a gaslight equivocality. Though the patterns themselves pose sequences of expansion and contraction, the dominant movement in the paintings results from the chromatically softening, scraped down surface, which flickers like the skips and scratches in an old movie.

Though this was Row’s first show in a commercial gallery, his work has been seen several times over the last few years on the alternative space circuit. This is a body of work that has had time to develop. It doesn’t illustrate or capitalize on theory so much resonate with experience. The symmetries in Row’s imagery and his sense of interior and exterior scale trigger a sympathetic response based on our sense of our own corporeality; further, the depicted light is a remembered light. The echoes of modernist abstraction (European geometries and Abstract Expressionist scale) are both an homage to that tradition and an expression of a will to continue it. Within their deeply considered historicism, these are simultaneously alert and reflective paintings.

The hand of the artist is as much a subject of Row’s paintings as their mood and histori- cism are. The vigor in his canvases springs from this combination. The much abused word “authentic” comes to mind. Realizing that authenticity is subjectively conferred, I’d still like to suggest that Row’s work has it in spades. The debut of an “authentic” painter, then.