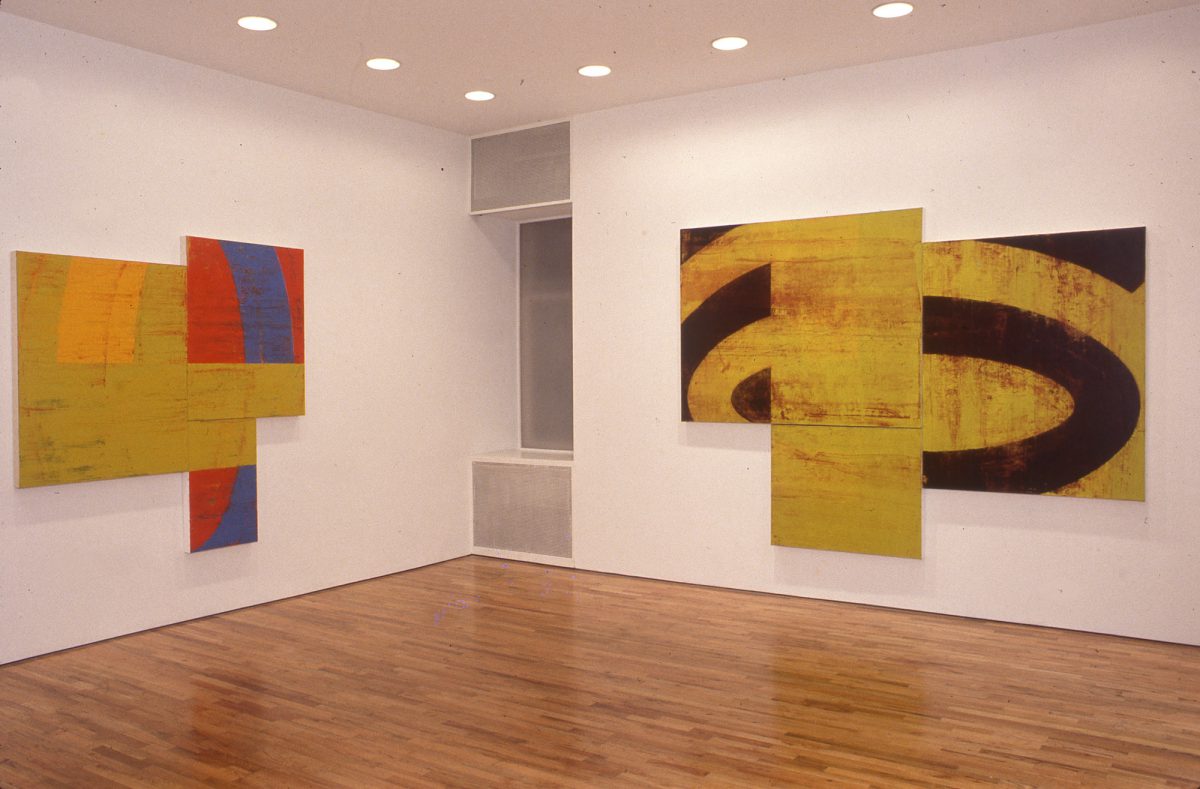 In David Row’s recent paintings, the austerity of his earlier work has been superseded by a new sense of vibrancy. Previously, Row suppressed color by covering brightly hued underpaintings with mostly black and white geometric patternings, allowing the color to escape only around the edges and in scratches across the surface. Now, the paintings burst with color: orange, maroon, pink, blue, yellow.  While his brand of geometric abstraction maintains a similar structural sensibility; the structural elements assume new meaning and life in this colorful incarnation.

Playing with contradictions of shape and form, Row paints broad arcs and bands of color. He composes each work on several canvases wherein lines and concentric ellipses fall off the edges. The ovals remain incomplete, leaving the viewer to imagine the missing fragments, Sections skip from canvas to canvas across the common seam and empty space which separate them. The various canvases do not combine to form a larger rectangle or square; they create an angular abstract form wherein the circumference lines define the painting almost as much as the interior shapes. Row pits exterior against interior, endlessness against enclosure and movement against restriction. By dividing the surface image and combining canvases, Row plays with space, form and illusion. Contrast band and off the top of the edge. The two canvases on the right have a bright blue arc across a red background, the arc falling off into space and divided at midpoint by the horizontal chartreuse band. The surface has a sensuous materiality wherein no color is solid; each color is pulled across the canvas with a knife creating a lush textural quality.

One immediately is captivated by the phenomenon of reception. The paintings engage the viewer by virtue of their intensity and dynamism. The multiple panels further the interplay of tensions and opposi- tions but, at some level, also hinder iiig colors increase the painting’s unpredictability.

In one painting, almost all are untitled, Row uses three canvases to such an effect that there is no one side of the painting which has a straight, solid line span- ning the entire length or width. It al- most appears as if two separate paintings collided against each other creating a new hybrid. A horizontal band of chartreuse cuts across from the panel on the left to the two vertically situated panels on the right. The one canvas on the left has an orange background with two chartreuse arcs growing out of the complete involvement with his pictorial system. Abruptly interceding in the geometric structure and color patterns, the shifting planes are dis- concerting. Row creates illusionistic spaces and evocative compositions which evade simple resolution. It is, in part, this complexity that lends a vitality and challenging ambiguity to his works.