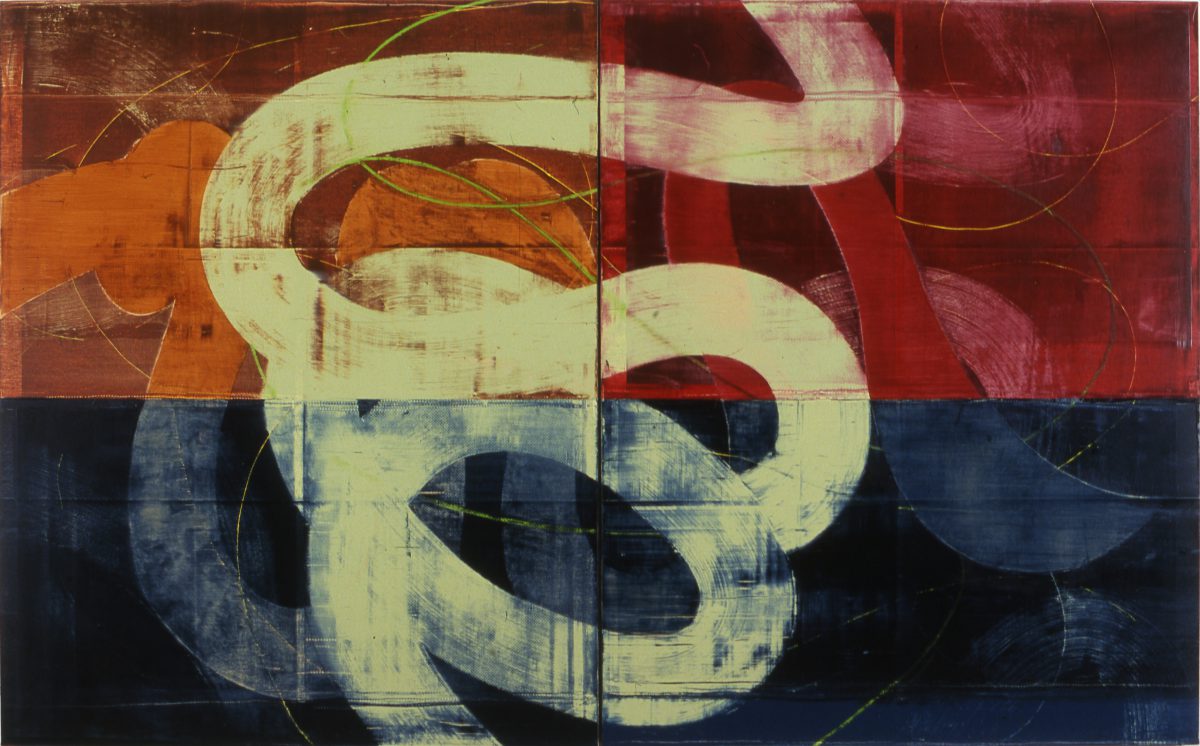 Prior to his 1991 show at the John Good Gallery, David Row was one of any number of art-world professionals—a painter adept at crafting abstractions that nodded to the theoretical and looked good on the wall. In the early 90’s, however, Mr. Row broke up and reconfigured his signature ellipses into mix-and-match triptychs. In the process he forsook expertise for what could be called professionalism with a purpose.

The works featured in the aforementioned Good ex hibition may have had their foundation in “semiotic analysis,” but they flourished as paintings,pure and not so simple. By locating logic within dissolution, the artist gave his dissected geometries an excitement they had hitherto bypassed. With them, Mr. Row’s weathered facture and electric colors became integral components of the work’s resolution, and he proved himself one of the few artists to utilize the shaped canvas as a means of confirming (and strengthening) pictorial space. The critic Barry Schwabsky called the triptychs “meditations on the numbers one, two and three.” What made the paintings compelling was their insistence that such mathematical meditations were, at best, a tenuous proposition.

Since then, Mr. Row has continued to refine his formal vocabulary, and the work has been handsome but often convoluted. In his paintings at the Von Lintel & Nusser Gallery, the artist can be seen stretching his stylistic muscles while playing it safe. The new canvases depict an architecture disrupted by veering pathways that have the heft and momentum of an interstate highway. The pictures haven’t, as of yet, found their structural axis; they’re manipulated designs rather than fullbodied pictures.

The best and not coincidentally, least programmatic painting is a diptych called Phosphor (1999). The work’s diptych format is, admittedly, an irrelevance, and the artist’s use of a 12-inch taping knife as a painting tool is mannered. But they are offset by a spatial and chromatic opulence that borders on the romantic. Mr. Row’s art would seem to benefit from the loosening, if not the abandonment, of compositional calculation.

Phosphor registers because its ghostly beauty is organic rather than engineered; it is, in other words, the one that got away. Let’s hope this capable painter makes his peace with “semiotic analysis” and goes out on a limb more often. David Row: New Works is at the Von Lintel & Nusser Gallery, at 555 West 25th Street, until Nov. 27.