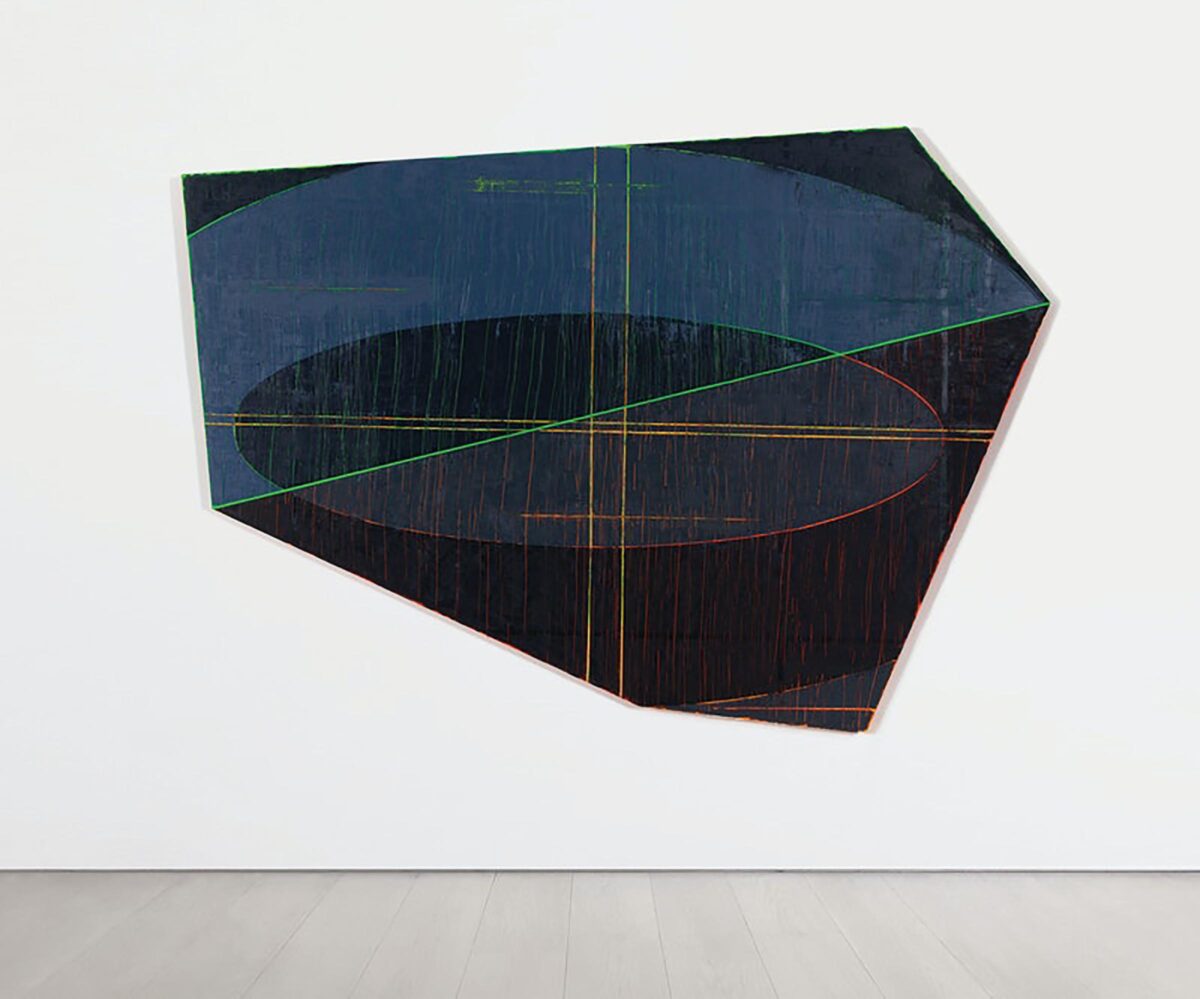 David Row’s third exhibition at Locks Gallery is a testament to the evasive, liminal, and arbitrary elements of vision on which the artist focuses our gaze. Shifting from canvas to wood panels, Row has continued his use of irregular-shaped substrates, deeper color combinations and contrasts, and layered geometries, interstices, corners, and two- and three-dimensional space. Collectively, the works draw among one another as protean images that bob and weave among hyper-colored planes ripe with visual and geometrical tension. They meld the abstraction of old with the color and disembodied vision we think of as existing only in virtual spaces—fractured artifacts pulled from the ether and displayed for our collective investigation. In this way, the exhibition can be seen as a scaffolding from which the artist has extracted and laid bare the point at which internal perception and external matter collide.

These newest paintings express more fully the transfiguration of the artist’s fixed images. Although static, they shift and morph as planes intersect one another, hyper-colored lines cutting through swathes of muted colors or intense fluorescent hues, as in Big Bend (2021). At times they disrupt their own visual wholeness, such as Chameleon (2020), whose planes shift in tonality between left and right, red and green. These lines also incise shapes to create three-dimensional illusions that visually protrude from or recede into the shallow space of the wall. In Far From Home (2021), a fragmented yet flattened ovular form appears to rest inside an irregular box, made evident by bright red lines that frame geometric shapes. The surface of the work, sectioned by azure and indigo, appears to be cracked like a piece of parched plywood or the gridded splitting of a sun-bleached billboard ad. The grid of red reveals a deeper structure that contrasts with the incompleteness of the painting’s edges. Row’s works force the viewer’s vision to extend and contract in this way, between the flatness of their surfaces and the depths of their illusions, between rigid structure and loose rendering, between the magnified details and atomized wholes. They are pure memory realized, plasticized, and solidified, ebbing and flowing between past and present and then reflected back to us as static composites. 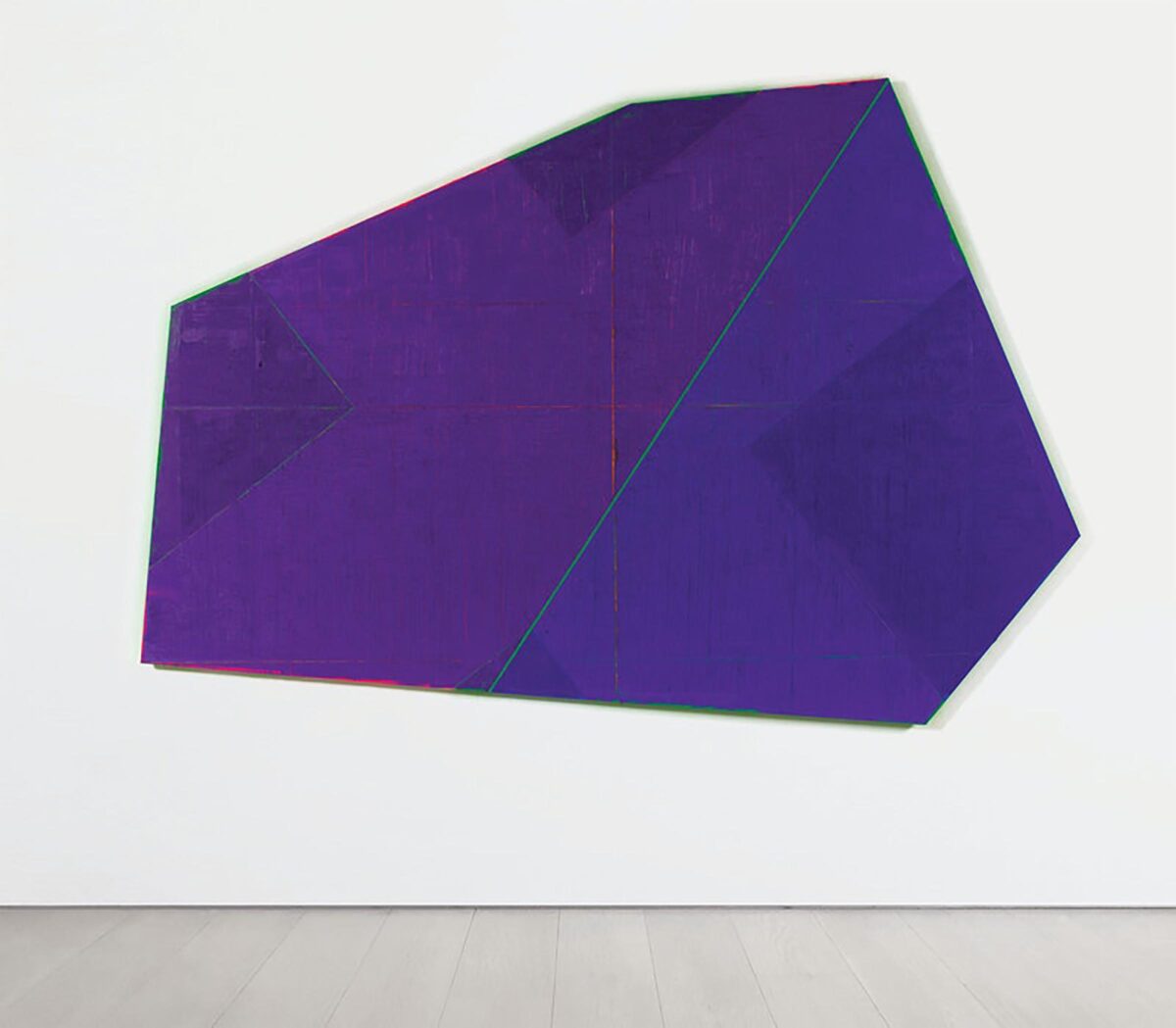 Row’s familiar motifs are ovals, vortices or cones, and X’s, the latter appearing in several of the new paintings, not as actions of striking through or canceling out, but thick and heavy interstices or junctions that fill the frame with visual weight. In Force Field (2019), the irregular polygon canvas frames a dominant dark gray X. Is it a cross tilted over and cropped? Is it a painted detail of a photograph or an aerial view of a building’s form? Is the X an X at all? This evasiveness is the point. The images move and shape-shift within my own psychological space, which itself is informed by my own experience and perception. The surface of Force Field is marked by vertical slices, or subtle lines, that feel as if the painting’s veneer cannot hold back its underlying configurations. This is due to the artist working back into the paint, one of many decisive actions that point to Row’s deliberate intentions. These surface marks reveal the red that lies beneath the black, a technique that suggests the Venetian Method and painters like Rembrandt and Vermeer. And then there is a bright laser-like line that cuts through the pictorial space at an angle and, popping off from the surface, severs the muted X into two flat T’s butted together. With the shape of the canvas, this effect creates a more three-dimensional form projecting out into space.

Color is the key to this activation and strikes one as pushing towards the precipice of human vision: color is radiated, toxic, atomic, ultraviolet, and infrared. In Heat Wave (2019), an intense vermillion backed with lime green is split by a radiant emerald line that creates a visual vibration often seen as destabilizing. And in this way, Row points to the tension between the image and our eye, with our brain decoding or recoding as it sees fit. The hyper-colored grounds are revealed as much along the edges of the wooden substrates as within the fissures of the surface top coat. The colors at the edge reflect onto the wall, framing the works in a subtle neon glow that attests to Row’s attention to the periphery and the slipperiness of perception. That color extends beyond the frame tells us that there is something behind the works emanating out, not just beneath their layered surfaces.

Row’s paintings remain open to the viewer despite their fixity and demonstrative elements. They are heavy and light, solid and liquid, mutable and multiple. He works symbols to the edge of their meaning, expression, and stability. Questions and changes abound for the viewer as the readings of the paintings are never pinned down or fixed in one art historical, conceptual, or formal moment. As such, the show reads as a series of tensions that bend but do not break and in that way Row’s work reveals the true spirit of artistic vision: ever fluid, changing, elastic, interrupted, reflected, abrupt, soft, and so on. His is an intuitive and phenomenological practice; the work, however solid, is one of pure liminality.