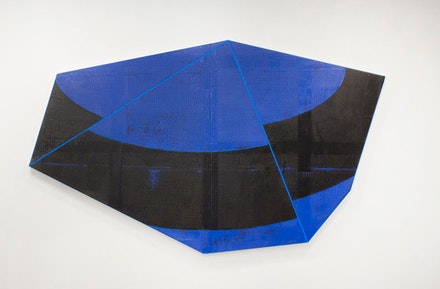 It takes a few turns around the gallery to ascertain the layers encoded in David Row’s crisp and brainy abstractions. His fractured canvases, plywood assemblages, and faux-assemblages, are puzzles that question the act of puzzling—in this case the act of constructing an image from odd parts. What is wonderful about these works is how they don’t need to follow through with what we’ve come to expect from a puzzle. While all the segments fit snugly together to form a variety of many-faceted irregular polygons, the surface imagery—loosely a thematic series of Xs and Os—does not usually add up to a contiguous whole. There are mismatched angular chunks interjecting into the curves of the Os and there are truncated and dismembered Xs.

Row’s game is to play with our preconceived notion that what seems inevitable geometrically, is not. A pair of works such as Axis 1 and Axis 2 (all works are 2018) offer mirror-image versions of the same geometric constructions, in a simple and inverted color palette of black and white. The active element in both paintings is a U-shaped curve penetrated by a sharp rhomboid element. By simply exchanging the colors from white, in Axis 2, to black, in Axis 1, these intersecting forms move from foreground to background creating a jarring sensation. While both reject the goal of completing the circles we find in works such as Macro and Time Lapse, Axis 2 toys with the impression of completing the curve, while Axis 1 appears staunchly opposed to its mathematical destiny. Row creates simple and flickering interplay not only in terms of the two-dimensional forms articulated across the surface of his paintings with a simple palette of whites, blacks, and blues but with the deceptively linear textures and the literal construction of the pieces, the viewer isn’t sure whether they’re sorting through a visual riddle or a observing a peremptory haiku.

The scent of oil pervades the gallery. It emerges from the thickly coated stretched canvas and plywood forms. This luscious density of paint lacks any discernable brushstroke, and instead, the purity of a perfectly flat surface is disturbed by semi-regular closely spaced vertical scratches that often penetrate from one layer of paint to a different color beneath. Floating on the surface is a layer of phantom text oriented horizontally. The text is imprinted from newspaper pressed on the surface and is rendered almost impossible to read because it is upside-down and backwards. This injection of visual static—both the scrapes and text—scuff and disfigure the surface, but counter-intuitively seem to heighten the viewer’s awareness of the interaction of the meta-forms, much in the same way that a cracked and chipped fresco makes one obsessed with the images one cannot quite make out.

Row assembles his larger works from three shaped forms nestled together to create an overall object. He doesn’t dwell on these divisions, and uses them more as vestigial separations that are the source of the geometric fractures that lend drama to his compositions. In the pieces with contiguous and complete shapes, such as Warp and Shift, these arbitrary fault lines hint at alternative geometries lurking beneath the surface. In the works in which they seem to inject a disjunction—especially in the placid blue and black composition Counter Clockwise—these fissures are active vectors of motion or rigid boundaries preventing the flow of form from one segment into its neighbor.

Similar to the artist’s willingness to discard a sense of geometric finality in his quest for motion and process—refusing to offer the viewer complete Xs and Os—is his substitution of the literal for the imagined in the actual construction of the pieces. While all of the canvases and one plywood piece are generated from discreet elements that have been assembled, the rest of the plywood works are forms that have simply been incised and then delineated via the painted surface. Row’s creative process seems to be very much about ritual: the planning for an anti-puzzle is perhaps even more rigorous than that of a puzzle that works. Add to that the multiple surfaces scratched and imprinted, and one can imagine the tortured decision as to whether the sections should be truly separate or a fictional representation of separation! The artist drags us into his Chinese box-like constructions. While the triptych structures toy with the same insistence of flatness one finds in Sean Scully’s canvas constructions, and the receding perspective and irregularly shaped painting surfaces call to mind the illusory space of Ron Davis’s “Dodecagon” series from the ’60s, Row is not trying to fool the eye or reject the picture plane. The series of nine small framed works on paper, Untitled, displayed in the gallery office present a much more playful side to the artist’s process that is lost in the sober choice of color and sagacious temperament of the larger works. Each is a unified statement, much like the repetitive trinity of forms of a slot machine; each combination of bells, cherries, and lemons catches our eyes and demands our attention regardless of whether or not it’s a winning pull.