“I’m endlessly fascinated by painting, whether it’s hanging in a museum or hanging out of someone’s trash,” says David Row. He can be as captivated by a piece of sheetrock scribbled on by a construction worker and left leaning against a wall as by a consciously created work of art. The constant visual stimulation is what this 46-year-old abstract painter enjoys most about SoHo, where he has lived and worked since 1975.

From the Crosby Street end of his loft, which overlooks the former New York City Police headquarters on Centre Street (now co-op apartments), the view of the building’s baroque curves bears more than a passing resemblance to the ellipse-filled paintings lining Row’s walls. In the paintings, bright orange curves are fragmented by blocks of dark pigment containing other shapes struggling to find space on the canvases. This is the “living” end of Row’s loft, which he shares with his wife, Kathleen, and their elusive cats; the “working” end is a jumble of drawings tacked to walls, cans of paint, and canvases in various stages of completion.

Within the past two years, several major events have altered the course of Row’s life and career. On the personal side, the unexpected death of his father was a deep emotional blow. On the professional side, he left the John Good Gallery and joined Andre Emmerich, where he had his first show last November. He also exhibited at Galerie Thomas von Lintel in Munich, and he has created a major painting installation in the new terminal designed by Cesar Pelli for National Airport in Washington, D.C., which will open this summer.

In the 1980s, Row was known for his paintings constructed of joined canvases. “I wanted to maintain the link between the painting as a plane and the painting as an object,” he says. While he still uses divisions—there are four in his most recent works; Row has set aside the shaping of his pieces to concentrate on the painted surface. Implicit in the sectioning, he points out, is a musical rhythm: four upright rectangles constitute a metaphor for harmony—a precarious phenomenon both in nature and in art. Within the illusory space of the paintings, Row’s signature ellipses, whole or fragmentary, whirl in a matrix of overlapping color bands.

“Complexity is where I am now,” he says, looking over his newest work. With their intricate, perplexingly dense surfaces, these paintings mark a transition toward a style in which chance plays a major role, with the artist allowing color and form to grapple with each other and coalesce. Row has reconfigured his ellipse, rendering it horizontal, vertical, bisected, and intersected. But wherever it appears, it is a threshold to the symbolic space of the painted surface, his personal metaphor for dynamism and stasis.

How this New England native, born in Maine in 1951, arrived at a philosophy of tension between opposites has a good deal to do with his biography. Although he grew up in the New Haven, Connecticut, area, it was neither the glaciated forms and muted colors of the neighboring landscape nor the softened sublime of West Rock, the nearby crag commemorated in numerous 19th century prints documenting that century’s perennial search for the picturesque, that stirred him to paint. Rather, he was inspired by the cacophony of new experiences that he encountered at the age of 14, when he was abruptly transported to Calcutta with his parents (his father was a city planner at Yale University). 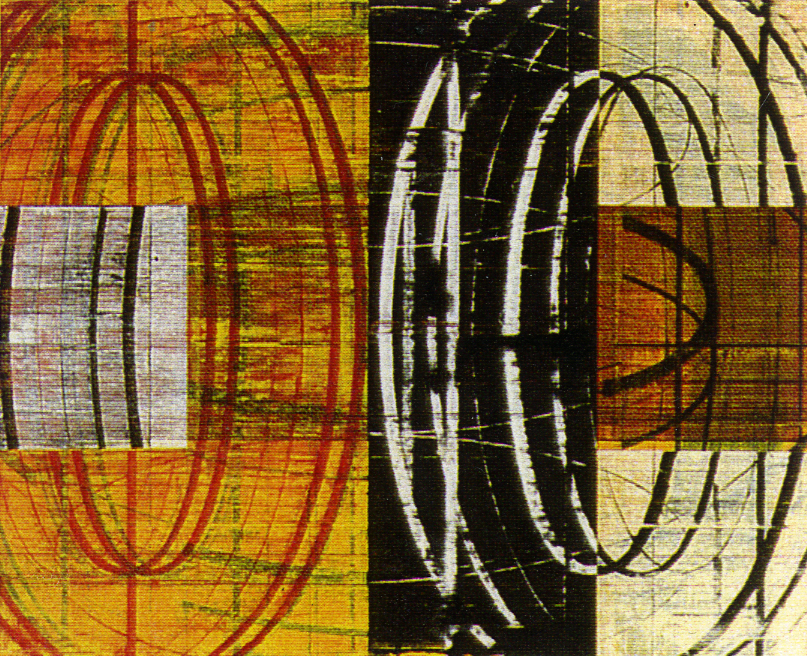 The process began with an assault on his senses. He was overwhelmed by sights, sounds, smells, and tactile sensations. “My sense of taste was jolted by spices I’d never known,” Row recalls, “my hearing inundated by music whose harmonies were totally alien to me.” This esthetic reeducation began with the sensory and only subsequently became a matter of intellect— paralleling the later effect of his paintings.

Row returned with his family to Connecticut after a year. When his parents subsequently went back to India, he stayed behind, enrolling at the Choate School in the Cormectictit hills as a boarder. His love of ice hockey, which he had been playing since grade school, was an incentive to stay, since there are very few skating rinks in India. He found himself—first at Choate and later at Yale—pulled in opposite directions, between playing hockey and painting. At Yale, his art classes were scheduled at the same time as hockey practice; so, with tremendous misgivings, he left the team and dedicated himself fully to painting.

Row’s hockey experience nevertheless held special significance for him. First, the physical parameters of the sport—with its glassy, enclosed playing surface—constitute a series of geometric abstractions, the very kind Row found in the writing of Edwin Abbott, whose fable, Flatland: A Romance of Many Dimensions (1884), concerns the social and sexual life of two-dimensional forms. The rink is an ellipse that the players crisscross to find the angle that will allow them to shoot the round puck into the goal. In addition, explains Row, “hockey requires instantaneous decisions accompanied by coordinated movements.” 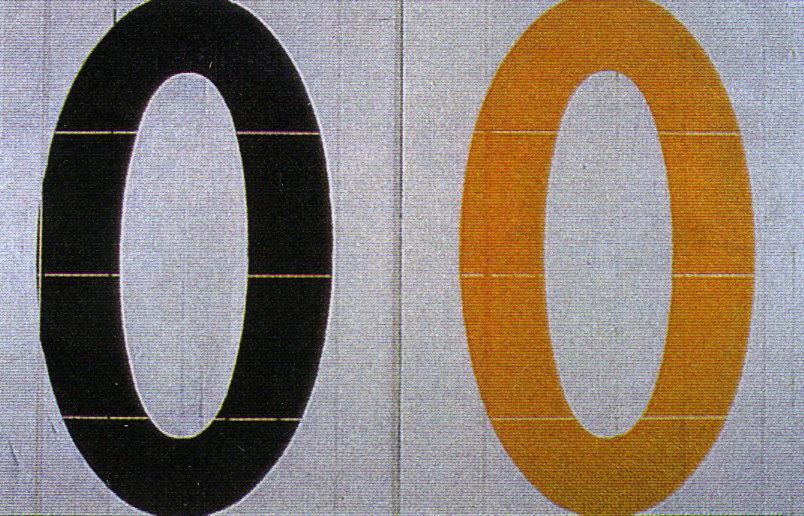 When Row entered Yale in the fall of 1968, art and architecture there still bore the stamp of Josef Albers (even though the artist had retired officially from teaching in 1960). Since Albers’s doctrines were in the air, Row found he had to define himself against them, first as an undergraduate and later as a graduate student. He was encouraged to think for himself by the sculptor David von Schlegell, who insisted that students break new ground rather than follow prescribed models. During his senior year, Row was able to pursue a completely independent program of study. “If I hadn’t been given that total freedom to do what I wanted,” he says, “I probably would never have graduated.” By graduation in 1972, he was in control of his art, both intellectually and technically.

Before completing his graduate work, Row went back to India for a year. He started out in Calcutta, studying Indian music, and then toured the subcontinent in the company of his music teacher. “I found the combination of traditional structures and sanctioned improvisation that characterizes Indian music,” Row explains, “in the jazz of Thelonious Monk and John Coltrane when I returned to the United States.” 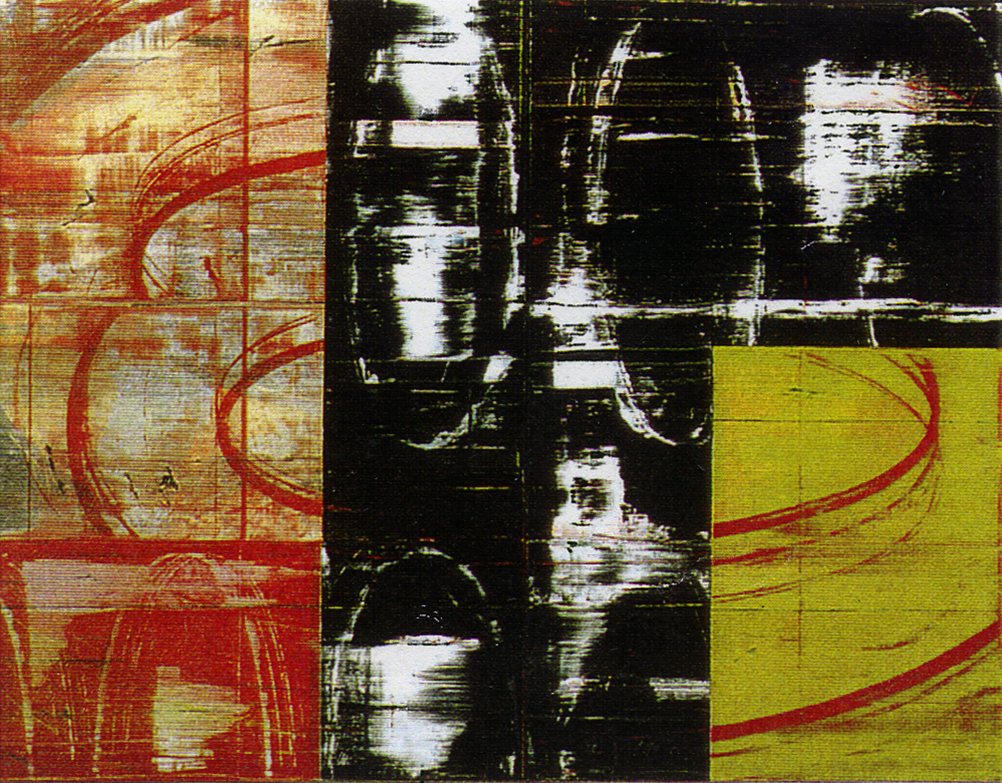 In 1975 Row moved to New York, where he supported himself by working as a “taper,” sealing seams between sheets of wallboard. He participated in his first group show in 1978 at the Drawing Center and had his first solo show in 1982 at Barbar Flynn’s Art Galaxy gallery. In 1986 he was in a group show at the John Good Gallery, and a year later he had his first one person show there.

Row has experimented with various media, but a foray into sculpture for a 1992 show in Hamburg, he says, “brought me back to painting.” His three-dimensional objects were a painter’s interpretation of sculpture, a kind of solid version of his drawings and paintings, “creating space rather than occupying it.” Their uncompromising solidity was ultimately not what he was after. What he wanted was “to take the viewer out of the here and now and into another dimension.”

Row’s reaction to Albers’s concept of color explains how color and space function in his own paintings. In the “Homage to the Square” series, Albers took the view that color has a life of its own, independent of the shape in which it manifests itself. For Row, exactly the opposite is true. First, color is not disembodied but is an aspect of a form; and second, one color may actually “drape” another in such a way that both occupy the same space at the same time. Color, therefore, does not have a constant value in Row’s work but changes meaning according to the context. 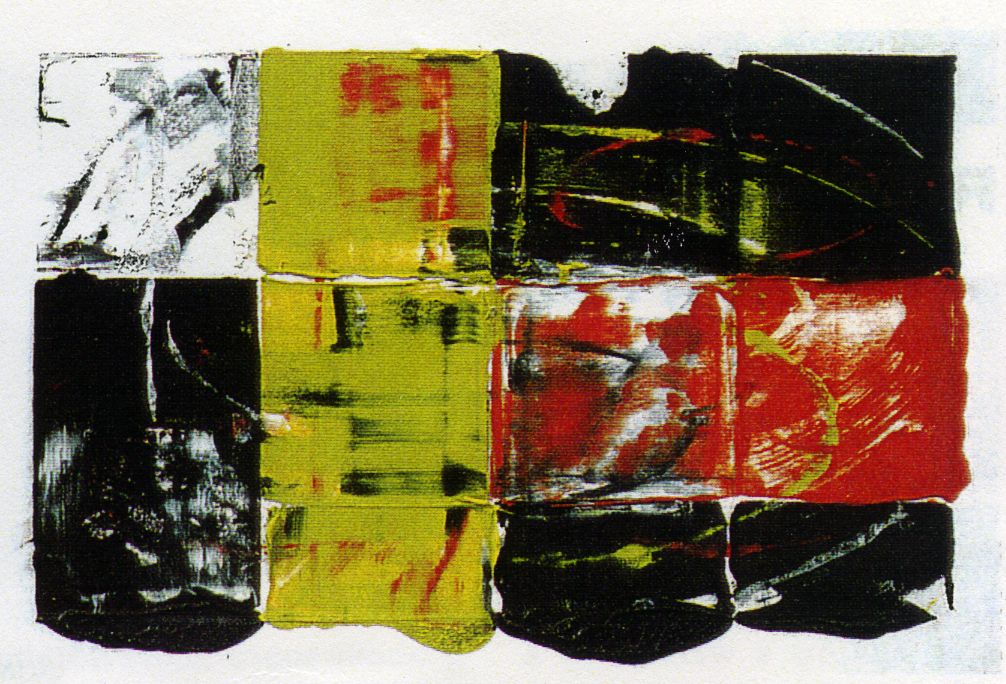 In the last two years, Row has been experimenting with graphics, making prints with Pace Editions and with David Lasry’s Two Palm Press for the Betsy Senior Gallery in New York. What he likes most about printmaking is having to work quickly and make the kind of snap decisions he had to make on the hockey rink. At the same time, the exuberance of graphics has spread to his painting: in his latest work, the battle between color and form threatens to go beyond the edge of the picture and engulf the wall beyond.

Row understands his work as “a series of cycles, all interlocking, all transitions from one to another.” His work rhythm reflects this pattern of change and repetition. He makes preliminary drawings, considers his options, and then starts painting— sometimes for a 20-hour stretch—arranging and rearranging until the canvas achieves its identity.

Standing in the working end of his loft—a palimpsest of canvases and drawings—the slim, subdued artist remarks in his characteristically offhand way: “The canvas is the stage where my imagination becomes action and causes the work to disclose itself bit by bit, both to the viewer and to me. I think that’s what painting is all about.”