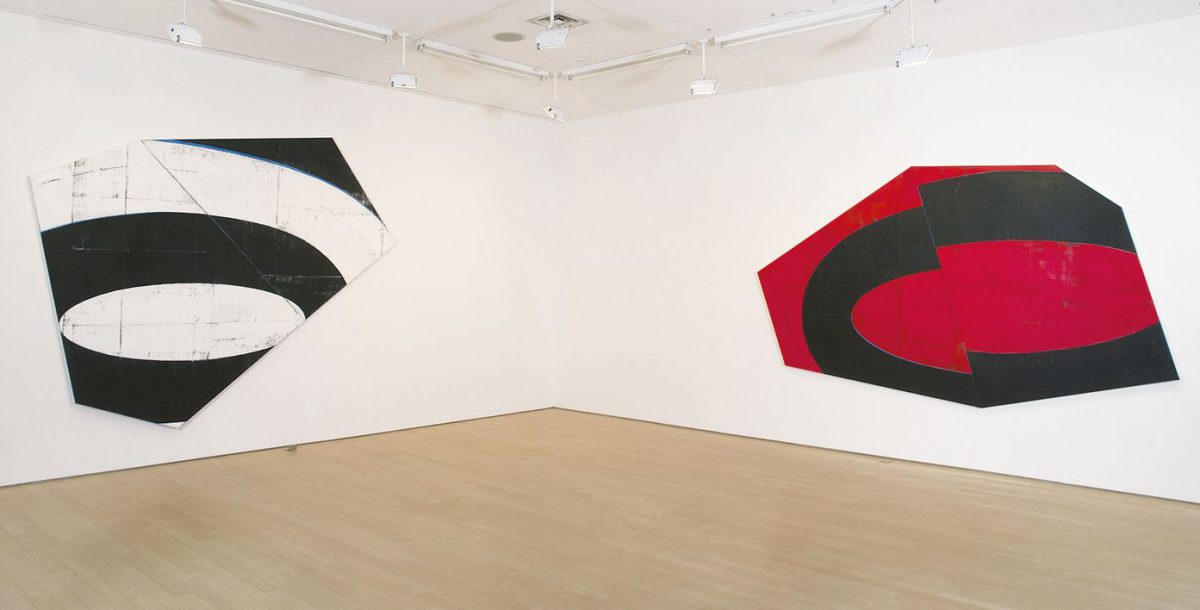 “There and Back,” David Row’s title for his stunning show of six shaped can- vases, is mysterious because it seems to refer to a departure and a return. But judging from these irregularly shaped canvases, Row’s work has followed a consistent, albeit evolving, course: we know his work when we see it, but it is always new.

And these irregularly shaped canvases confirm it. In Loretta Howard’s space, they looked like bizarre Viking shields, clearly intended to attract rather than repel. Maya (2014) is a large 51-by-91- inch piece painted predominantly in a complicated, acidic green that Row long ago made into a signature color. Just visible at the center of the seven- sided canvas is a faint line, a kind of datum plane or horizontal axis. Inscribed left and right of center are yellow-or- ange vector lines leading the eye up to distant corners. Bisecting the equatorial line is a vertical axis reminding us that the principal tension in a Row painting is between a centripetal motion whirling toward chaos and a grid work that holds chaos in place.

Row’s shields could also be aerial views of fortifications, as ex- emplified by the mag- nificent Thingamajig (2014), a massive 107-by-133-inch, black-and-white com- position. The eye travels upward to the remote acute angle at the top of the canvas, as if to a place where it might meet danger. It’s all, of course, an illusion, Row’s way of fixing the energies of action painting with the discipline of geometry: nature sub- dued by art, as it is, stunningly, in Pooka (2014), where a vivid red threat- ens to burn down the fortress-canvas but remains restrained by its own form. Row never left, but he sure is back.