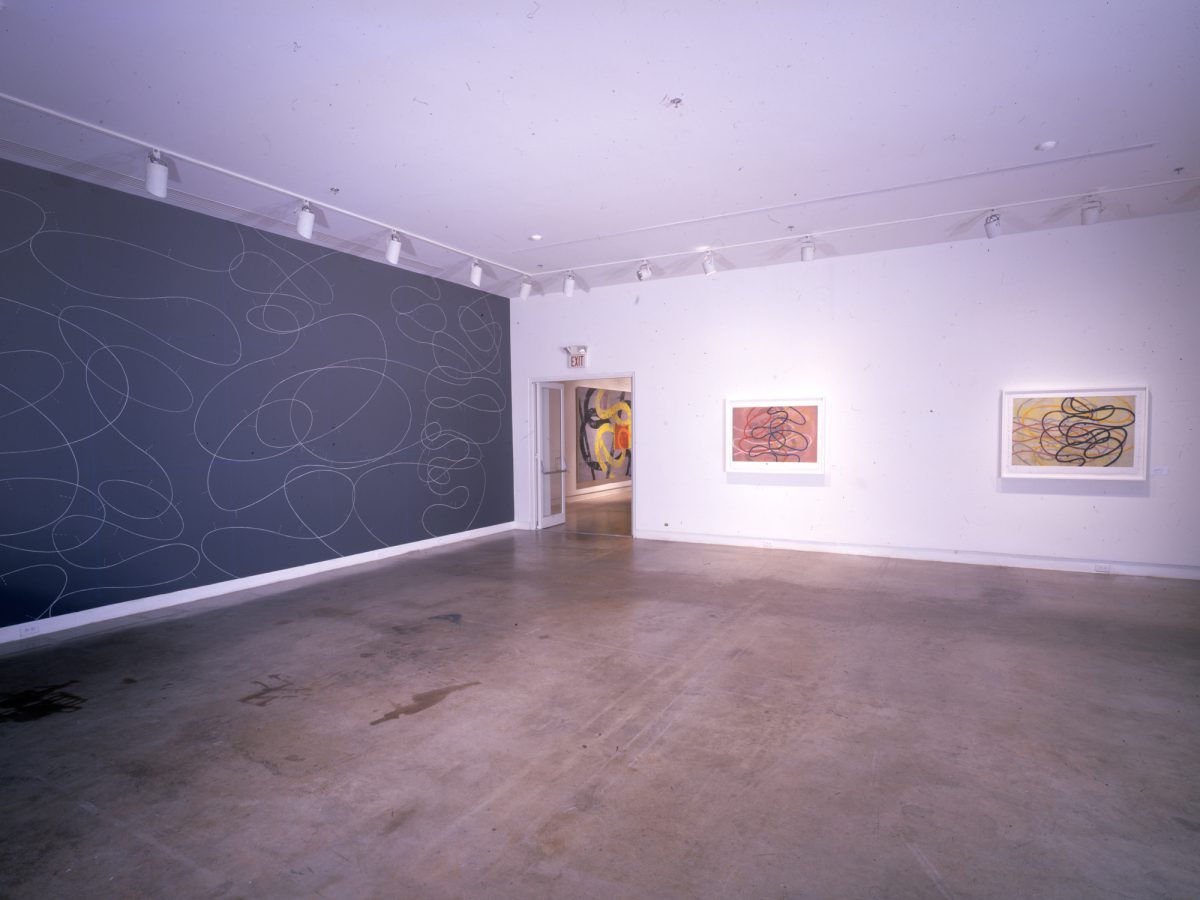 David Row titles his exhibition at the McKinney Avenue Contemporary “Ennead.” Ennead is the Greek word for “nine” and when used as a proper noun it refers to the nine muses of the arts and sciences. Mr. Row’s muses find their embodiment in the curving white lines that make up his wall drawing at the MAC.

He has painted the wall black and gridded it in dark blue. Despite the fact that the individual lines run for dozens of feet, each one has the sweeping feel of a gesture made by a single pass of the artist’s hand. Their elegance and sensuousness ameliorates the starkness of white on black. Short dotted double lines that mark each of their arcs adds a quasiscientific, diagrammatic feel to the work. Mr. Row refers to his “muses” as strands of DNA.

Variations on these linear deand the lines themselves, in rich colors like red, dark blue, orange, or black, stand out against faded backgrounds in pale green or mauve. Monotypes are paintings on glass transferred by a press to create a one-off image. The faded but dense background of each of these monotypes is the ghost image left from a previous run through the press. The freshly applied lines of color stack up on these backgrounds and create a shallow, tangled space.

As with the wall drawing, Mr plication. This gives the images, despite their sometimes startling color, a stately rhythm. In his large paintings, usually in the neighborhood of 8 by 10 feet in size, he emphasizes the manufactured nature of his lines, here almost a foot in width, by using screens to apply some of them onto the surface. Multiple canvases and areas that have been taped off at different points in the painting process allow for abrupt transitions within the otherwise ribbony flow of line and color.

The paintings are accomplished demonstrations of a technique Mr. Row has been developing since the 1980s, but the high point of this exhibition remains the monotypes, with their luxurious handmade paper and unabashedly gorgeous color.