back
Geometry and Its Discontents
October, 1992
by John Zinsser
Tema Celeste
download PDF 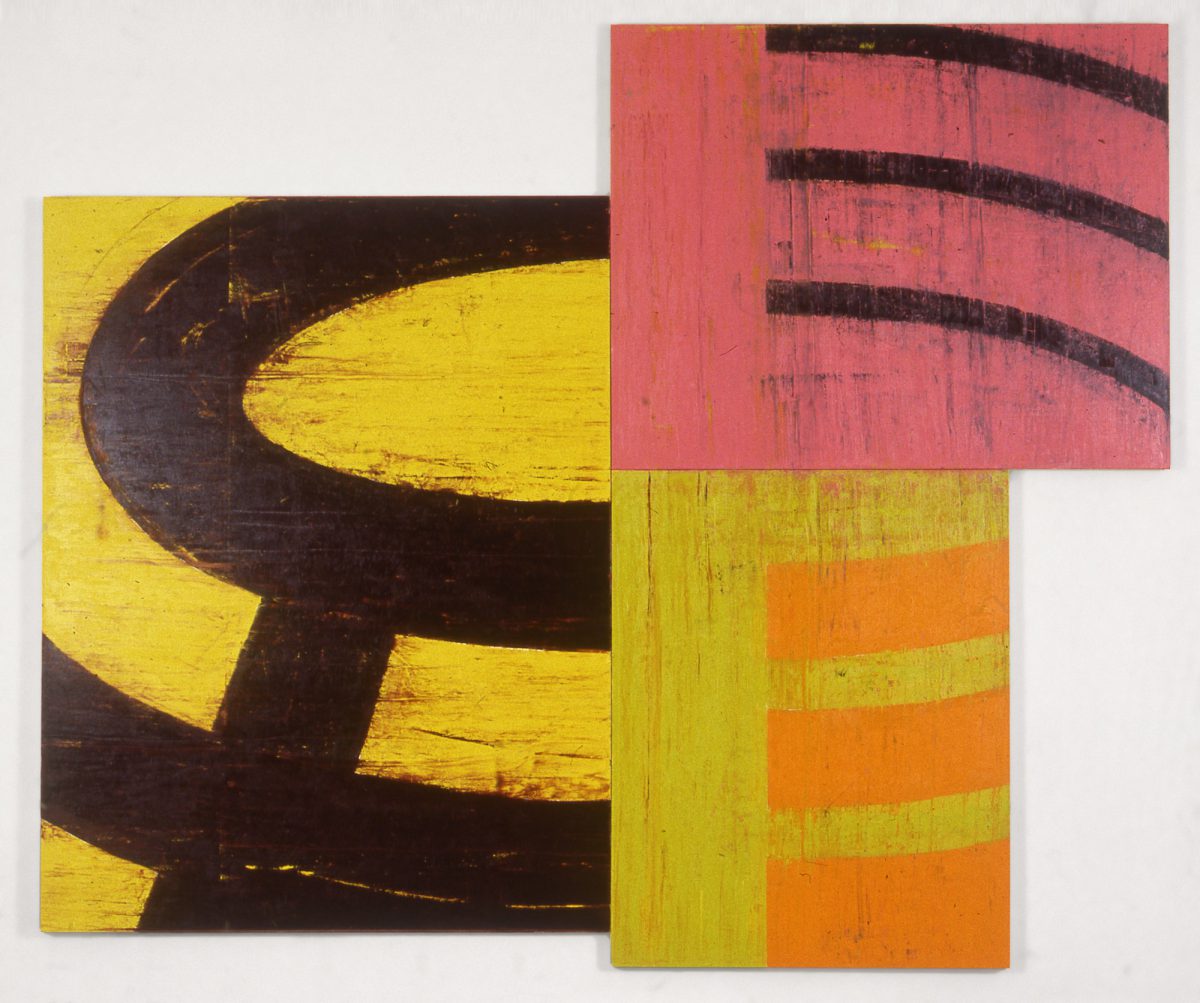 The pluralism represented by this new generation of artists is certainly refreshing. escaping any moniker as convenient as the “Neo-Geo” tag that critics bestowed upon their 1980s Predecessors. As we slip from the last decade to this one, what is emerging is a growing sense of primacy. as expressed through an increased attention paid to material concerns as well as to the emotional drive behind the work.

Since the origins of non-objective Cubism, Futurism and Constructivism in Europe, abstract painters have employed geometric structuring in their work as a means of locating its relationship to the surrounding culure. With Post-War American abstraction, this sensibility became especially acute. One cannot view a Kenneth Noland flatly stained chevron painting of the early 1960s, for example, without seeing it in the expansionist optimism that charged the air during John Kennedy’s presidency. How then are we to respond to the varied ways in which contemporary American artists are now addressing painting issue’s through the predetermined language of geometric abstraction? The text that follows looks at eight representatives of this movement. All approach their work not in terms of appropriation or nostalgia, but with a spirit that responds to the current cuhural climate.

Gary Lang’s freehand grids and targets are surprisingly painterly, loaded with color and exuberant energy. In the square format Lang’s work initially resembles overdetermined madras plaid in tondo, it looking more like a tortutous test for color blindness, But neither of these descriptions does justice to the personal and emotive qualities that Lang’s paintings contain, or to the ominously disturbing presence these works assert as their self canceling color schemes are viewed over time.

Using commercial sign paint in all its straight-from-the-can permutations, Lang builds his paintings one stripe at a time. Overlapping lattices are constructed in an intuatively methodical wanner, self-consciously “cheerful” in their palette. In immediate reading, the disarming simplicity of Lang’s paintings sense take off from the canonical example of Piet Mondrian’s, Broadway Boogie Woogie. Excuted near the end of the artists life early 1940’s, the piece informed by his then recent move from Europe to New York. In this work Mondrian celebrated New York as a Jazz-age matrix of color, shape and sound. Likewise, Lane’s overactive paintings herald the animated liveliness of the modern cityscape serving as metaphorical signage for the shared metropolitan experience.

Representing a more coolly calculated approach are Michael Scott’s Neo-Op strip paintings. Executed mechanistically, Scott’s works consists of hard-edged vertical pinstripe black bands applied onto primed matte white honeycomb aluminum grounds. The way in which the paintings are physically made rougle is in no way manifestly apparent. As such the gestural presence of the maker is coldly distanced from the viewer.

Further alienation is induced by the actual viewing experience: the paintings are so manically hyperoptic that they are literally difficult to look at. Faced with one such painting, this viewer found himself seeing a pulsating moire pattern at the center of his field of vision and rushes of prismatic color at its peripheries. While Scott’s work may be plotted in a rigorously formal manner, in its viewing it becomes wildly active. even psychoactive.

A pat response to this work would be that – like the mid-1980s work of Ross Bleckner and Philip Taaffe — Scott is appropriating a motif from Op-Art as a way of ironically resuscitating a “dead” art historical movement. It’s true, no doubt that the configurations and execution of Scott’s paintings borrow heavily from the tropes of the original Op movement, those of pattern painter’s of the 1960’s such as Bridget Riley and Victor Vasarely. Yet that’s a little too easy. Scott’s work has a valid piimacy of its own, troublingly effective in its severe emotional detachment.

Mary Heilmann, the oldest of the artists being dicussed here, brings an unexpected youthful playfulness to her work over the last few years she has concerned herself with the manner in which geometry can be rendered gesturally, humanistically. Heilmann builds up her canvases in thin washes of primary colors, always keeping her iconographic terms to the absolute minimum. In fact, her final compositions are often arrived at through a negation of what’s underneath. Her imagery — evoking readings of squares floating on fields; irregular flagstones; climbing helixes; or flags of yet-undiscovered nations — is often defined by a single milky sheet of paint. This methodology may at first appear disarmingly simple but it gets its real charge by playing off the already established minmalist strategies of artists such as Brice Marden and Niele Toroni.

In her recent show at New York’s Pat Hearn Gallery, Heilmann used the installation to openly attack the prevalent attitude of painings as rarefied object. The gallery known for its sparase installation, was used instead as a container for a freely hung show that accomodated a large numner of works in all shapes and sizes.  Viewers did not know whether to look at the works individually or collectively. And the paintings. although consilzem with one another in con- ception and execution, displayed a daringly eclectic set of pictorial ideas many employed tricky formats, shaped canvases which served not only to de termirw the geometric schema within but made explicit the role of the stretcher bars and canvas as a physical support structure. Throughout, Heilmann displayed gestural freedom without ever losing a tightness of purpose.

ln her work Mary Weatherford more than Heilmann. is openly concerned with questioning pre-existing cultural notions of beauty and gender in relation to the painting-making activity. Weatherford makes medium-to-large-scale square-format works in which a photoslikscreened image is incised with a centered target motif. Often a stereotypically “feminine” photographic image is superimposed by silkscreen on top of a decisively “masculine” hard-edged geometric target. This double entendre gives the work an edgy quality that belies its initial readings of beauty and elegance.

In a recent series shown at the Marc Jancou Galierie in Zurich, Weatherford adopted the opera Swan Lake as her subiect. She had a photographer take a picture of swan feathers seemingly floating through ‘space. This image was enlarged into a silk. screen the size of the canvas and used as a common leitmotif between the paintings. In each, a differing degree of hard-edged geometry would show through the image. Weatherford chose colors in the silver and black range to futher the graphic reading of the work and to play off the pliotograph is nature of the painting source. In all, the imagery remains tautly flat, like a once-removed Greenbergian allover field.

The choice of the target motif is certainly an art historically loaded one, invoking comparisons to Jasper Johns and Kenneth Noland_ While W’eatherford’s serial usage of silkscreened photograph as a painterly device recalls Andy Warhol and Robert Rauschenberg. Yet, in distinction from the highly-visible group of 1980’s painters that preceded her (Sherie Levine, Mike Bidlo, Julie Wachtel, et al.), Weatherford cites her historical sources gently, in a manner that is riot openly appropria. live. Weatherford’s reading of art history-as-text is an intentionally skewed misreading, calling into doubt the power-structures that those images so readily recall.

Richmond Burton is more concerned with the literalization of metaphor. His “thought plane” series is an open investigation into the mechanics of painting-making. These works threat their own physical working methodology as directly analogous to the painter’s thought process. The wooden support structures for these single and multipanelserve as a rigid architecture, from which the final configuration is determined. Striped bands of black paint are described by swings of a compass from focal points either at the image’s center or at it’s perimiters. The wooden blocks from which the compass turns are made from the left attached, the final works presenting themselves as self-determining machines. The resulting stripes are the width of a single wide brush separated by thin areas of raw canvas – a structure that draws immediate comaprison to Frank Stella’s black painings of the 1950’s

But where Stella employed this device as a kind of dead-end self-describing tautology, in Burton’s case the format relates more directly to the bodyspecific aspect of the painting activity. The compass arcs serving as as mimetic surrogates for the proportional reach of a painter’s arm; they are mappings of the physical process through which all abstract paintings are made.

As with Burton’s imagery, David Dupuis’ mazelike constructions foremost describe the process of their own making. Using gel painting medium. Dupuis attaches thin strips of paper directly to the canvas surface, achieving a tactile bas-relief effect. The resulting configurations — like a vulernably human form of die casting – range in mood from freely antic to oppressively claustrophobic. The paper and canvas surface is then further activated by Dupuis’ use of flashe paint, a mat waterbase paint that is brushed on or fingerpainted in successive translucent layers. A distinctive pure white surface light results, variable and seemingly undulating.

Like Jasper johns’ use of encaustic, for Dupuis this methodology allows a way of achieving painterly results while preserving thp material integrity of the work’s own making. Like Philip Taaffe’s mid-1980s collage age of Op-inspired geometry, employing paper and a hard-edged template against which he counterposes a more painterly touch: rationality pitted against the ineffable forces of human emotion.

Stephen Westfall’s flat grid constructions and neo-Supramatist diamond confifurations also reveal a quiet pathos. Their imagery resting with discomfiture upon the achievements of Modernism. Painted in tuned-down variants of primary colors,his characteristic grid paintings never quite line up straight, as if they have slipped from a perfect Platonic condition to one that accepts the doubts and failures of the modernist program. Like the writing Samuel Beckett they capture a sense of hopelessness through an austerity of terms. These paintings are not cynical or ironical: they are lovingly painting in thin layers, the hard-edged geometry not achieved with msking tape but by hand that shows meticulous and halting self restraint.

More free-spiriled are Westfall’s diamond series in which the square canas is literally turned on end to become a diamond. This format determined, the free-floating shapes contained seemed to spin off one another, let loose from the confines of conventional rectilinear rigor. Throughout his work Westfall has determined a hermetic self-referential language that, viewed over time, asserts a self-negating logic prone to visual pun. As with Westfall, David Row’s work plays off a viewers’s pre-established expectiations of what geometry painting shoudld “look like.” His recent show at John Good Gallery in New York was ambitously concieved and exceuted, comproed of large-scale works made up of multiple intersecting recatgular panels. Here Row’s work shared an attitude with his antecedents Ellsworth Kelly and Frank Stella: that abstract paintings can operate at a scale and with visual imapct that relates them directly to the popylar culture experience. As such they transgrress freely from ratefied traditions.

These works with their lush painty acid-colored surfaces, were demarcated by gesturally sweeping arc and monolithic rectangles. As configurations, these can be read as enlargements and extrapolations of shapes introduced in the artit’s earlier, more formally restarined works. Row’s paintings have gotten consistendly less quiet over time, as evedinced by his current high-key palette and can-do-no-wrong confident paining handling. For Row, sheer conviction has subsummed the tole of content, the paintings asserting themselves most strongly through their heightened physicality.

The pluralism represented by this new geneartion of artists is certainly refreshing, escaping any moniker as convenient as the “Neo-Geo” tag that critics bestowed upon their 1980’s predecessors. This new crop is clearly more free-associational in it’s use of art historical quaotation, openly borrowing without getting hung up on the notion of the past record as a sacred text.

As we slip from the last decade to the this one, what is emerging is a growing sense of primacy, as expressed through an increased attention paid to material concerns as well as to the emotional drive behind the work. As the decade progresses, perhaps a sense of the shared idology will more clearly coalesce. It’s an exciting posibility.

John Zinsser is a New York based painting and writer.